Living in the Big Blue Nation 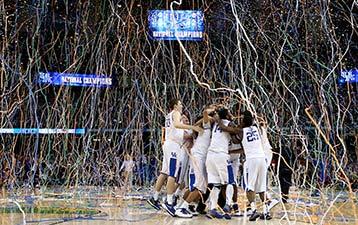 As soon as you land in Lexington, you'll notice something almost immediately- blue is everywhere. It's not only because you are in the "Bluegrass State," but because Lexington is the home of the "Big Blue Nation," also known as the BBN. The BBN isn't only composed of University of Kentucky students and alumni, but the entire Lexington community! Get ready, because you'll start to bleed blue in no time.

The University of Kentucky's Men's Basketball Team, is the champion of 8 NCAA championships, with the most recent one being in 2012. Under head coach, John Calipari, the team is consistently ranked in the top spots in college basketball. Once basketball season begins, you can be sure that you'll be hearing a lot about basketball everywhere you go in Lexington.

Rupp Arena, located just a few minutes from UK's campus, is where the UK team hosts their basketball games. It's the place to get loud and cheer on for the cats. In Rupp Arena, students get the opportunity to sit in eRUPPtion Zone, also known as the student section in the stadium. If

Are you ready to make this your Big Blue home?

Apply Now!
When you come to Kentucky, you'll officially become a part of a huge family- the BBN. This means that team spirit in Lexington is always at an all-time high, and we celebrate our wins and our losses all together. Before you realize it, this city and university will be your home-away-from home.
international@uky.edu
(859) 323-2154
ukyinternational