Join the UK Confucius Institute, along with hosts the Digital Restoration Initiative and Professor Brent Seales, Department Chair, Computer Science, in welcoming Paul Dilley, Associate Professor of Ancient Mediterranean Religions at the University of Iowa, for the newest installment of the UKCI Distinguished Speaker Series.

Professor Dilley's lecture is entitled "Language and Religion along the Ancient Silk Roads: Spotlight on Manichaeism." The event is free and open to the public.

Abstract: The silk roads connecting China with Central Asia, Iran, and ultimately the Mediterranean basin served as a conduit of many different peoples, religions, languages, and texts.  The prophet Mani, a Mesopotamian Christian and adviser to the Iranian emperor in the middle of the 3rd century, founded a global religion that spread out along these roads, reaching China by the 7th century.  In this talk, I introduce the Manichaean religion and its surviving manuscripts, which have been uncovered in some of the most spectacular discoveries of the 20th century, to demonstrate important aspects of cultural diversity along the silk roads.  While many of these writings are fragmentary and challenging to understand, digitization has made them more accessible, and new technologies promise to reveal more of their secrets.

Bio:  Paul Dilley is Associate Professor of Ancient Mediterranean Religions, with a joint appointment in  the departments of Classics and Religious Studies, where he is Director of Graduate Studies.  After receiving his undergraduate degree in the Comparative Study of Religion at Harvard, Dilley went on to acquire two M.A.s (Classics, Religious Studies), a M. Phil. (Religious Studies) and a Ph.D. (Religious Studies), all from Yale University.  He specializes in the religions of Late Antiquity, particularly early Christianity, with an approach that integrates cultural history, philology, and the digital humanities.

Dilley has received multiple grants and fellowships, from organizations such as the Alexander von Humboldt, Jacob Javits, Woodrow Wilson, and Mellon Foundations, as well as the American Research Center in Egypt, and is a senior fellow of the Mellon Society of Fellows in Critical Bibliography; and given invited talks and lectures in Europe, North America, and the Middle East.  At Iowa he teaches introductory lectures on the Abrahamic religions and ancient Mediterranean religions, as well as a variety of more specialized courses and seminars in Classics and Religious Studies.

Professor Dilley’s research covers the religions of the Mediterranean world and Iran, from the Hellenistic period to early Islam. He is especially interested in the development of early Christianity within the various cultures of the Graeco-Roman world, including Egypt and Syria; as well as the reception of the classical tradition in these diverse areas.  His first book, Monasteries and the Care of Souls in Late Antique Christianity: Cognition and Discipline (Cambridge University Press, 2017), explores the innovative practices for the training of thoughts and emotion, both individual and group, developed within early Christian ascetic movements, from the perspective of cognitive anthropology.  He has also published various articles in journals and peer-reviewed collections on ancient asceticism and monasticism, the development of orthodoxy and heresy, apocryphal literature, and the canon.

Professor Dilley is co-editor with Iain Gardner and Jason BeDuhn of the "Dublin Kephalaia Codex," a fifth-century Coptic manuscript of 360 surviving pages, containing previously unknown discourses of Mani, the Christian arch-heretic.  The editorial process has involved extensive use of digital photography, including multispectral imaging, to recover damaged text, with generous support from the Australian Research Council and the National Endowment for the Humanities.  A collection of preliminary studies on the manuscript’s exciting new contents, Mani at the Court of the Persian Kings, appeared in the Nag Hammadi and Manichaean Studies series (Brill, 2014); and the first of four fascicles of the critical edition itself appeared in the same series in 2018.  Professor Dilley’s research in Manichaeism is part of a broader interest in the various modes of large-scale and long-term interaction between ancient religious traditions.  He is an organizer (with co-PIs Timothy Barrett and Katherine Tachau) of the 2016-2017 Mellon Sawyer Seminar at the University of Iowa, “Cultural and Textual Exchanges: The Manuscript Across Pre-Modern Eurasia,” which can be explored here: http://eurasianmss.lib.uiowa.edu/.  More recently, his research on the X-Ray tomography of ancient manuscripts, with computer scientist Brent Seales, has been featured in the New York Times, Newsweek, and Iowa Public Radio.

Professor Dilley is also a Digital Humanist, conducting research in text analysis, including “distant reading,” a strategy to uncover clues for interpreting large literary corpora through algorithmic analysis.  He explores basic issues of Greek and Latin text analysis in his article “Digital Philology between Alexandria and Babel,” in Ancient Worlds in a Digital Culture (Brill, 2016), co-edited with Claire Clivaz and David Hamidovic, the first volume of the series Digital Biblical Studies, for which he is a member of the editorial board.  With Sarah Bond, he is a founder and co-PI of Big Ancient Mediterranean, a developing tool and group of modules for the coordinated exploration and visualization of linked geospatial, network, and textual data related to the ancient world. 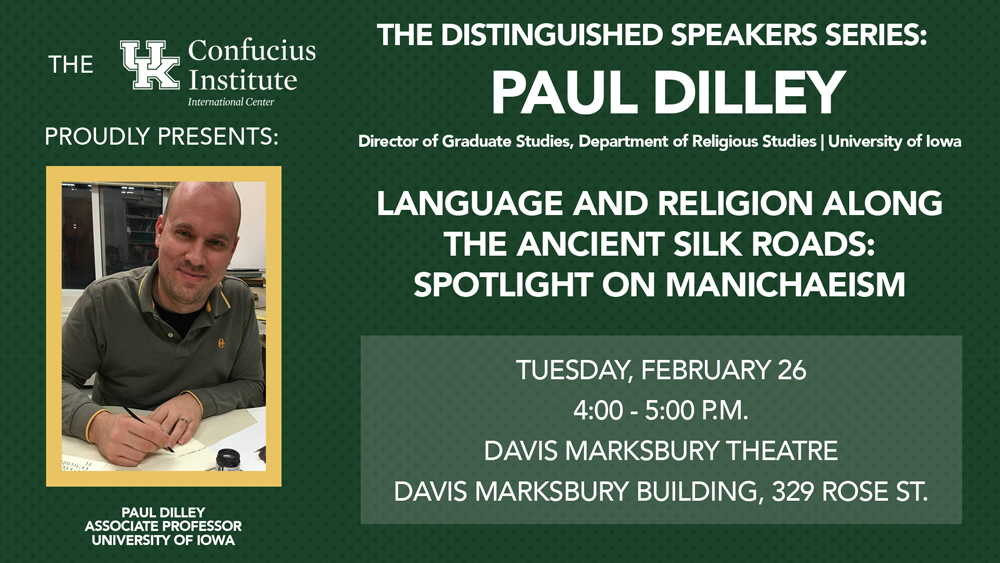