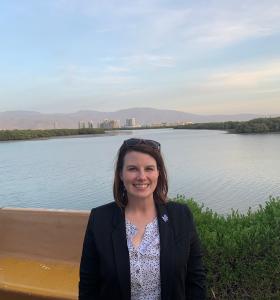 Niamh wins the award for most difficult name to pronounce in the office because her name is Gaelic and pronounced “Neeve”. She was born and raised in Texas. Niamh attended Louisiana State University and received a Bachelor’s degree in Geography and minors in Political Science and Spanish. During the summer after her junior year, she studied abroad with a partner program in Granada, Spain. After her experience abroad, she decided to pursue a career in International Education. Niamh attended The University of Texas at Austin and received a Master’s Degree in Higher Education Administration. While in graduate school, she participated in a semester-long exchange at the University of Tampere in Finland. Prior to moving to Kentucky, Niamh worked at The University of Texas at El Paso for six years running the Study Abroad Office. Niamh is now a member of the NAFSA Region VI Leadership Team. Some people spend money on shoes, Niamh chooses to explore the world. To date, she has visited 36 countries and counting!