East Meets West: Bringing Two Cultures Together for an Evening of Fashion and Art 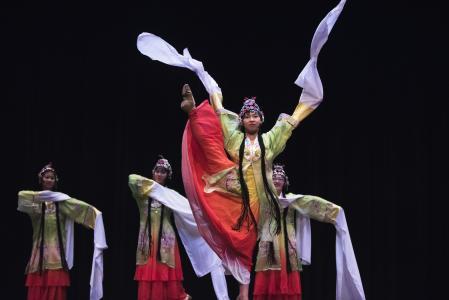 Held in the Haggin Auditorium at Transylvania University for its second production, “East Meets West” was a unique show that brought together the cultural differences of the east and the west, providing the audience with a captivating and engaging performance.

“What’s really significant is that the theme of East Meets West is reflecting what our institute is trying to do: bridge the two cultures of China and the United States,” said Huajing Maske, Ph.D., director of the UKCI and executive director of the Office of
China Initiatives.

The program showcased a variety of acts, merging the artistic styles of Eastern and Western cultures. There was a unique musical pairing of an American harp with the Chinese GuZheng, an enchanting jazz dance to Chinese music from the 1920s and a modern Chinese fashion show highlighting traditional costumes from different dynasties.
The creative visions of Fashion Designer and Producer Qi Zhou and Art Director Shuling Fister from Shuling Studio came to life through the beautiful dances, remarkable melodies and stunning fashions.

Aside from UK students and faculty, many members of the community also attended the performance.

“Programs like this really bring the campus together and diversify the kind of cultural enrichment we provide for the campus, students, community and
faculty,” Maske said.