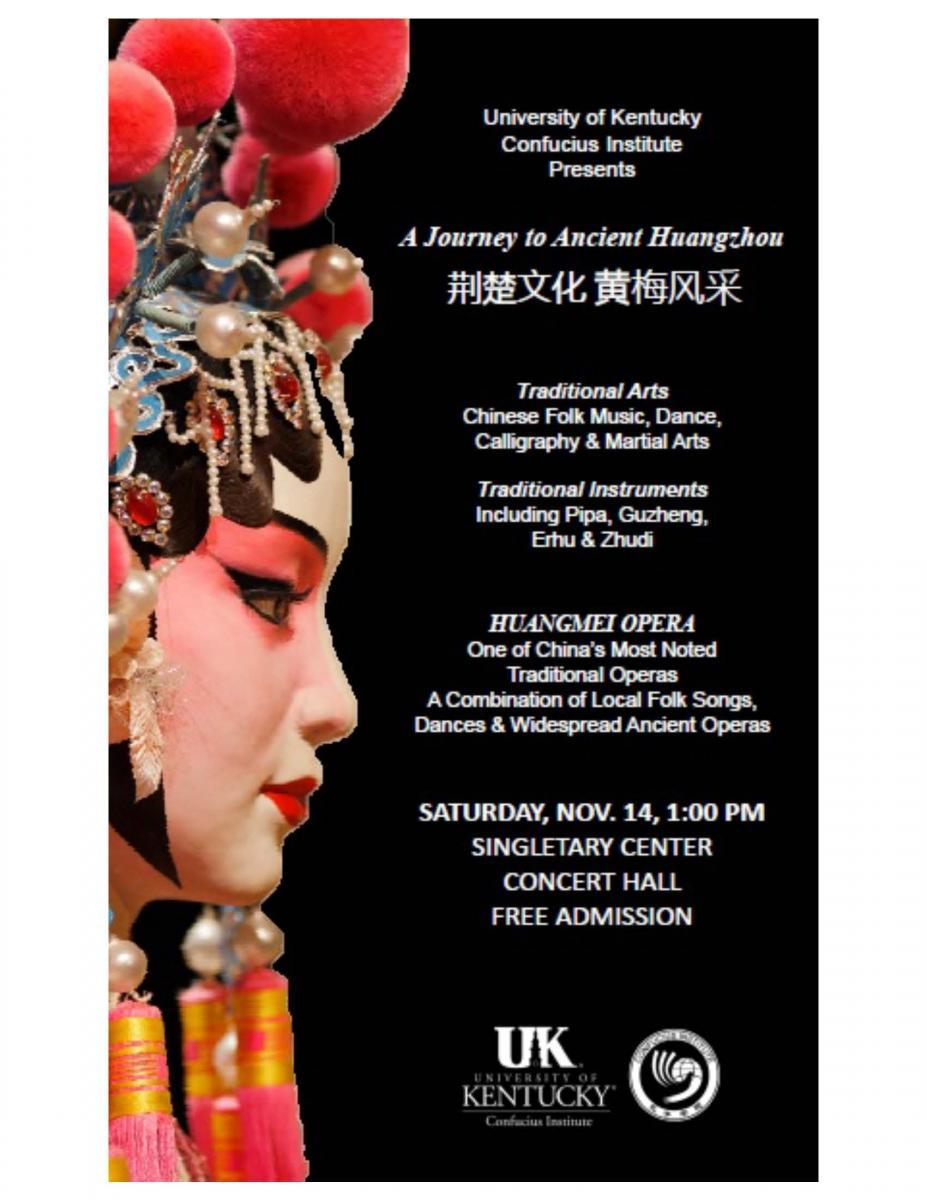 The University of Kentucky's Confucius Institute will take audiences on "A Journey to Ancient Haungzhou" with the Huangmei Opera. The program will begin 1 p.m. Saturday, Nov. 14, at the Singletary Center for the Arts. The performance is free and open to the public.

“A Journey to Ancient Haungzhou” will showcase the talents of China’s Huangmei Opera in traditional dance and music. The troupe was formed in the 18th century and is one of the most noted traditional opera theaters in China. The Huangmei Opera comprises 30 performers including musicians, singers, actors, dancers and martial artists.

"The performance for this Saturday’s show is unique because it presents some episodes of one of the five major operas of China and the most favorite among the common people — the Huangmei Opera (the Yellow Plum Opera). Unlike Peking Opera, which features dramatic make-up, fabulous costumes and high pitched singing that is popular in Northern China, the Huangmei Opera offers beautiful make-up and costumes and much softer and mesmerizing songs that are popular in South China. The troupe includes Chinese National Rank One and Rank Two actors, which are the highest ranks in the Chinese performing circle," Maske added.

Before the show begins, the Confucius Institute will present awards to six UK faculty members, six UK students and six high school students who won the second annual “China Through My Lens” photo contest presented by the institute.

In addition to Saturday’s show, members of Huangmei Opera will visit two local elementary schools to demonstrate some shorter programs on Friday. The dancers in the troupe will also be active in the community on Friday presenting a masterclass at UK.

A gateway for Chinese language, culture and art to the people of Kentucky, the UK Confucius Institute provides leadership, support and coordination for Chinese language and programs in K-12 schools as well as on UK's campus; assists and facilitates establishing and maintaining faculty and student exchanges between UK colleges and Chinese universities; conducts Chinese language and cultural exchange; and promotes education about China on campus, across the Bluegrass region, and throughout the Commonwealth.