UK Alumnus Discovers the Power of Art Through Street Murals 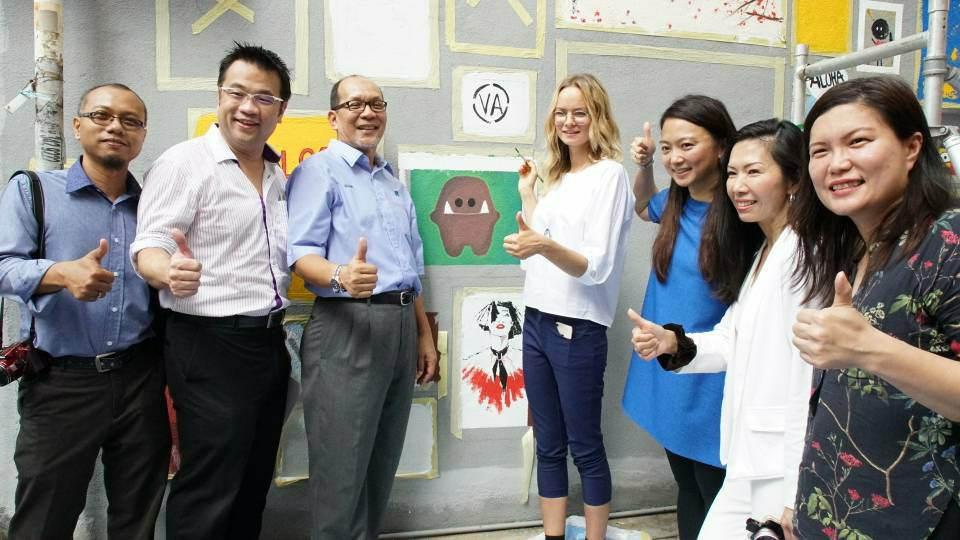 Adrian Lim, a University of Kentucky graduate, has discovered just how impactful art can be in a community. Born and raised in Kuala Lumpur, Malaysia, Lim has been working to improve the public vicinities of bustling neighborhoods in Malaysia through his involvement in the creation of street murals.

Lim became involved with the project when his family invested in a block of store fronts in a community area in Kuala Lumpur known as United Estates Projects Subang Jaya Regalia Business Centre. Lim and his family wanted to form a community committee to make improvements in the physical environment, cleanliness and safety of the area. In 2017, after a period of implementing cleanliness campaigns, a community member proposed the idea of creating street art and that’s when the fun began.

A fundraiser was held to purchase art supplies and local art students from tertiary institutions such as the International Trade and Industry Centre of Art & Design were given the opportunity to paint the first set of murals. “It also created lots of excitement as the community would come out daily to see the progress of the murals that took about a month to complete,” Lim said. Eventually, Lim recruited Siberian artist, Julia Volchkova, to become involved in the murals and provide tips to the art students.

Lim’s main role is organizing the street murals and helping the committee select mural designs. Lim, who obtained a master of business administration from the Gatton College of Business & Economics at UK, jokingly said he is not allowed to paint because he failed art in school.

“When I was a teenager, art was a subject I dreaded because I just could not paint or draw,” Lim said. “My appreciation for art started when I got to UK and started noticing how colorful some of the rooms can become after art is added to the walls. The basement of Bradley Hall was transformed into a beautiful activity room with international murals on it.”

Lim has also had a hand in bringing street murals to other community areas. In early 2017, Lim organized one of the largest street murals in Malaysia in his parent’s home town of Muar, Johor. Artists from Canada, Belgium, and UK were brought in to work on the project.

“It’s today a tourist and photographer attraction,” Lim said. “These murals have not only improved the ambience but also brought about more business for the traders in the vicinity.”

When reflecting on his time as a student at UK, Lim said his favorite lesson was learned outside of the classroom. Lim enjoyed meeting students from all parts of the world and learning from UK’s diverse population.

“Lessons which I still hold dear are how to accept others who are different,” Lim said. “It helps me at work, in my community service work, and even in interfamily relationships.”

Through his time spent organizing the murals, Lim has seen the impact that art can have on community areas as far as mood, economic improvement, and bringing communities closer together. Lim has used art to embolden communities, turning gray walls into colorful landmarks. The murals will likely be a source of inspiration for years to come.

“Art is not a hobby for me, but more of a mission toward helping improve my community,” Lim said.