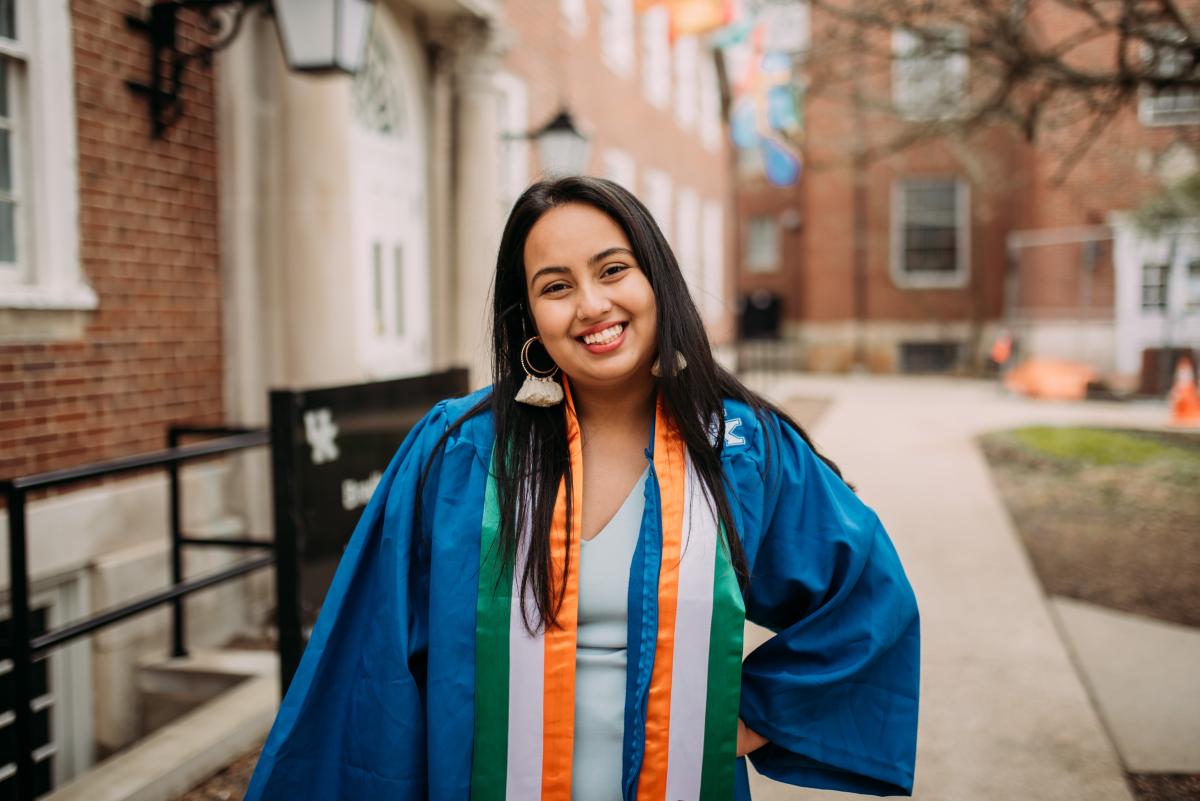 LEXINGTON, Ky. (May 4, 2022) — For many across the Bluegrass, the University of Kentucky runs in the family. The same goes for Pallavi Raichur, set to graduate with a degree in business administration this May, and her family, even across an ocean.

Originally from Bengaluru, India, Raichur's family is creating a legacy at UK. This May, she will become the third member of her family to graduate from UK, each of them traveling from India to attend the university.

Raichur's father, Ashok Raichur, became the first in the family to graduate from UK in the early 1990s, when he earned his master’s degree in materials engineering. From there, the connection between the family and the University of Kentucky continued to grow.

At UK, Ashok Raichur found a supportive environment and the perfect community for an international student to grow and learn.

“He always talked about how great UK was,” Raichur said. “He truly fell in love with this place, the Lexington community, everything here. As the time came, first for my sister and then me, to apply to colleges, he kept talking about how great it was here. He was right, though.”

When the time came for Raichur's older sister to apply to college, there was only one destination she envisioned.

“She knew she would go to UK,” Raichur said. “She loved her time here. She was just constantly sending me pictures, texts, calling me to tell me all the amazing things she was doing, the people she was meeting, and all that she was learning in her classes. I was so jealous.”

As Raichur got closer to applying to colleges, she worried whether she would be accepted to UK. She wanted to have that life-changing experience that her sister was having and that her father had decades before. That worry evaporated quickly upon applying.

“I applied and then thought ‘now the waiting begins,’”  Raichur said. “The next day after applying, though, I got accepted. I just breathed this huge sigh of relief. I knew I would be a Wildcat.”

Once she arrived on campus, all those calls, texts, and that family connection came in handy.

“It can be scary coming to a new place, a new university, as an international student. My sister coming here before me gave me that connection beforehand. So, I knew where to go if I needed something or how to register for classes. It was really helpful, and it helped me get out of my shell a bit. My international classmates knew they could ask me questions because I might be able to help.”

As she progressed in her studies at UK, Raichur continued to grow, becoming more extroverted and engaged, stepping into leadership roles across campus.

“I was shy and introverted before I came here,” she said. “I was the type of person to just stay inside and watch something on Netflix or something. Now, I want to go outside and engage and lead on campus.”

For the Raichur family, UK has helped them achieve their dreams. Ashok Raichur is currently a professor of materials engineering at the Indian Institute of Science in Bengaluru, India, and Pallavi’s sister, Prachi, is currently in medical school at the University of Louisville.

As for Pallavi Raichur, she isn’t yet ready to say goodbye to her UK family. After graduating this May, she will continue her studies at UK by pursuing a master’s degree in finance.

“I’m so excited to stay in Lexington and complete my master’s degree here. There’s so much pride in this place,” she said. “My whole family, we’re all so proud to be Wildcats.”